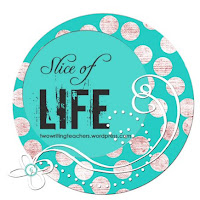 Setting up a babies room can be a challenge. There are so many different components that go in to a feat such as this.

I am not a big "girlie girl", so finding a bedding set that didn't look like Pepto Bismol was a challenge. I wanted something that said she was a girl without you going into sugar shock. I settled on a purple and grey color scheme with an owl theme. Not those bright colored owls that you see everywhere, a semi-realistic grey owl.

Well I was so excited to find a plush owl made by GUND. I quickly purchased it and set it carefully on the glider in the corner of the nursery when it arrived. I stood back and took it all in. The room was starting to pull together and I was starting to lose some of the panic that had set in from not being finished.

While at work the following day, I received an email from my husband entitled: Bleu's toy

Bleu is one of our newer additions. Our sweet cat Mojo passed away over the summer at 5 years old from kidney failure. This broke my heart...he was such a special piece of my life, but that's a story for another day. We ended up getting two kittens soon after from the Humane Society and one of them is our grey and white Bleu. He is a barrel of fun, curiosity, and mischief.

Anyways....this is what I found attached in the email. 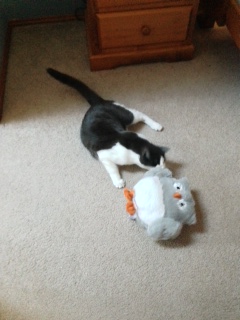 Yes, you are seeing things correctly. That would be the adorable grey owl that I purchased FOR THE BABY. Bleu can barely carry it around but that doesn't stop him. He hooks his sharp daggers into the wing and lugs it around like a lion with its prey. It doesn't matter where I put it, Bleu will find it. He has climbed on to window sills, into cribs, opened drawers, and he's even tried to hide it from me. I think that he may be in for a harder transition than the boys when it comes to the baby.