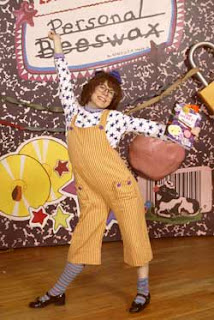 Today was our class field trip to The Admiral Theatre. I love when I'm able to give children the opportunity to make connections. This was the perfect opportunity. We were going to see the play (really a musical) called Junie B. Jones. My girls were so excited and couldn't wait to see which book they'd perform. My boys weren't as excited so I was a bit worried. None the less, we loaded on to the buses and traveled the 20 minutes to get to the theatre.
When entering the theatre, you quickly discover the under water theme. It's been forever since I've been in this particular theatre and I'd forgotten about the decor. The ceiling is a pale blue that, reflected off the lights, resembles the ocean. Fish swim on the walls along with turtles and mermaids. Now, I have a classroom full of 3rd grade boys and they were quick to point out the shell-less mermaids. I was mortified. They giggled, pointed, and whispered to each other. I can just imagine the phone calls that I'll get tomorrow. ﻿
So we settled into our seats...first and second row right in front of the stage. My kids bounced like Mexican Beans while they waited for the performance. A HUGE writer's notebook was on the stage....Top Secret Personal Beeswax. The lights dimmed and out popped Junie B. Jones...singing at the top of her lungs. Then she opened up the notebook to reveal notes jotted all over. Each little snippet would be a large part of the play. The children tapped each other as they made the connections. The whole premise was written for all of them to see.

I was sandwiched between two of my rather opinionated boys. I knew that they'd be very verbal about their thoughts. They giggled, roared, and applauded throughout the performance. The play was a success.

I'd like to say that I left the experience at that but I couldn't resist asking them to reflect on their trip. The responses were phenomenal. They were not only making connections to their writer's notebooks, but were also reflecting on the story line. Multiple stories made up this one play. I also had disappointed girls who wanted to see the stuffed elephant and felt that he was a huge part of who Junie B. is. What a great opportunity to talk about literature. I was in my glory.

It was so nice to see literacy in action and to watch my kiddos be so engaged. I love when I'm able to step out of the classroom and let them see how it all connects to life. I SO love my job!