We sauntered into Boston this weekend to enjoy the sights and sounds. Let me just start by saying that I could spend the rest of my life in Cambridge without any complaints. I love the brick buildings, the clean air, people walking to their locations, the random parks, the shops hidden underneath the brownstone apartments, and the people. I felt right at home.

The highlight of our trip was catching a Sox game. Going to Fenway Park is an experience that I will never forget. Hopefully we can make a few more trips this summer when the weather is a little warmer. We just got swept into the enthusiasm of the crowd.

We walked from our hotel to the park. The roads were dotted with people heading from here to there, runners preparing for the Boston Marathon, and Sox fans working their way to the stadium. Heavy Boston accents (which I just love) shared the air with the smells of hot dogs, and freshly roasted peanuts.﻿ We turned the corner and people were packed into the streets. We had reached our destination. It was a sea of blue and red. I felt like I was in an ant mound...people swarmed from every corner but somehow formed a semi-orderly line into the stadium. 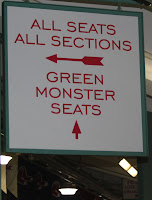 As we shuffled into the stadium, I was in complete and utter awe. I have been in new stadiums but they don't hold a candle to the classics. The green walls were covered with odd bits of memorabilia. Signs from all corners fought for my attention. There were your normal shirt and hat vendors, but I was surprised by the fruit stand. There were your staple foods: hot dogs, peanuts, and cracker jacks...but there were also sweet taffy and clam chowder. My mouth began to water the second the smells reached my nose.
As we rounded the corner to head outside, we were hit by a wicked breeze. It was going to be a cold game to watch, but well worth it. As my husband led us to our seats, I rolled my head from side to side taking in the view. AMAZING! We continued to walk closer and closer to the field. My husband got great seats on the first base line. As we stopped by our seats, I saw all of the minor league mascots heading in our direction. I quickly scooped up J and told T to follow. We were going to give some high fives. J was able to give every single mascot a high five and almost had his fingers taken off by the eagle mascot. He was excited but wanted to see Wally, the Sox mascot. We got some good pictures, but no hand shakes...this time.

The game was about to start. My boys ate their way through the first 3 innings of the game. Salty ﻿popcorn was shoveled into mouths by the handful, followed by Fenway Franks, Soft Pretzels, and peanuts waiting to be deshelled. As we ate, we listened to the thick Boston accents behind us spouting out stats and encouraging the players. I was in heaven. The frigid breeze blew through my many layers of clothes. My sweet husband disappeared, only to reappear moments later with knit hats for the boys, a fleece blanket for T, Wally for J, and hot cocoa for me. We were set.

There are so many special moments to share and not enough space. We sang "Take Me Out to the Ballgame", stretched our frozen muscles during the 7th inning, sang "Sweet Caroline", and even managed to get on TV. It was a special night that ended with J sound asleep in my lap while we watched the last sliding catch of the game. We cheered, and willed our frozen bodies to make our way out of the park.

What a magical day to spend with my boys. I am eager for many more ballgames like this. A few more Fenway games and maybe a trip down to Baltimore to check out Camden Yards. Sounds like heaven! ﻿
Posted by Elizabeth G. at 11:24 AM