I am ashamed to say that I am a week over due in posting my amazing week. Better late then never. 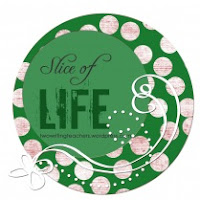 I was honored to get tickets to the first home game (3rd Stanley Cup Final Game) of the Boston Bruins Stanley Cup Finals. As my son's vice principle stated, "This is the Super Bowl of Hockey." She couldn't have uttered more truer words.

If you haven't been to a Bruins game, then let me explain. After each goal, the crowd screams a loud "Whoo!" My husband prepared me for this but I was only able to Whoo once the last game I attended. This game was very different. I felt comfortable yelling out comments during the game. "Shoot the puck already!", "You've gotta be kidding me!", and "We want the cup!" None of these utterances filled me like the many whoos that flew from my eager lips this night. 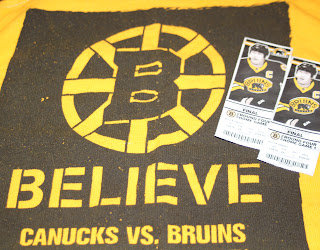 As the music reverberated through my body, my eyes scanned the ice like a hawk searching for prey. I held my breathe as I watched shot after shot ricochet off the posts. As the goalies pads lifted from the ice, I saw the black beetle-like puck scurry into the net. I bolted from my seat, shot my arms into the air, and screamed out a loud WHOO! Then came the loud whoops and hollers. Strangers spun around and slapped my hands as they screamed and jumped.

Moments later, I was springing from my seat and bellowing another WHOO! Hands were combined again and lungs were pushed to their limit. I began to claw at my itching palms that screamed from all the clapping and slapping.

8 Whoos later and I was descending the stairs to leave The Garden. The opposing team's fans held their heads down, a look of pure bewilderment in their eyes. How could they have one the first two games and get walloped this game? They tried not to draw any attention to their clashing blue and green as they were smothered by a sea of black and yellow. Chants of "Let's Go...Bruins!" filled the hallways and echoed in my ears. Once outside, the chats continued and were accompanied by car horns and feminine squeals.

I leaned against my husband and said, "I am giving you fair warning...I may wake up in my sleep and throw my arms up in the air and yell Whoo!" He smiled, threw his hands in the air, and gave a manly Whoo!

What a night...my head quickly welcomed the pillow when we arrived home. My eyes looked at the clock and registered the 12:45 time while my heart began to slow down and my breathes became fewer. Whoo and good night.
Posted by Elizabeth G. at 12:38 PM