It has been a long time since I've sat down at my computer and purely written for enjoyment since moving to Japan. I am so busy exploring and embracing the new adventure that is my life. I feel like it is a permanent vacation and I just can't get enough of it. I'm hoping to document some of the amazing places I've visited in the 5 months since I arrived here. So here is one of my favorite trips. 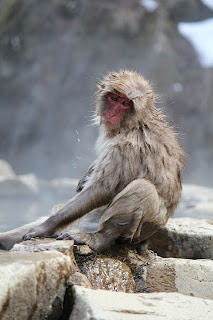 I was lucky enough to travel with my whole family to the northern part of Japan to see the snow monkeys at the Jigokudani Snow Monkey Park. The Nagano Prefecture tends to be filled with snow in the winter.These beautiful animals come down from the hills to warm themselves in the natural hot springs (onsen) that surround the area. 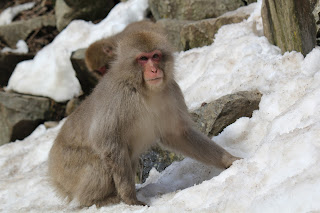 The females come down with the babies to warm themselves in this cold area. The area is known as "Hell Valley" due to the cold temperatures and the steep hills. This particular area is buried under snow 1/3  of the year. 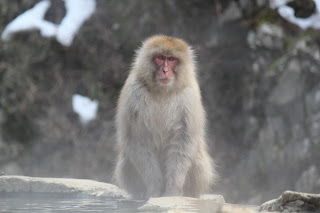 The group of Wild Japanese Macaque have been coming down to this particular are for years. The park was opened in 1964 for ecological observation of researchers and photographers. Every day people come daily to visit the monkeys and marvel at how they live in this harsh environment. 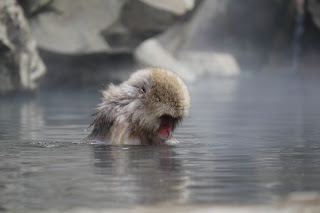 We had to hike up a very small path up a winding hill to get to the area where the monkeys gather. My husband and I corralled our children to the right to avoid the deathly cliff to our left. Thankfully snow hadn't fallen in awhile so our path wasn't very slick. When we reached our destination, my daughter (2 years old) began to squeal and point towards a building. I swung my head around to see multiple monkeys climbing all over the building with grace and ease.

My heart began to flutter with excitement and I couldn't walk/climb fast enough. 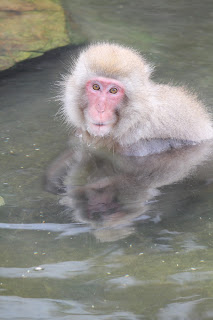 We climbed a steep staircase and were met with a huge group of people. Cameras, video cameras, and recording devices littered the walkway. To my left was a steep, rocky hill filled with snow and monkeys burrowing into the ground looking for a small meal. My eyes quickly wandered to the pool of water to my right. I dug my camera out of my bag and made sure that my big lens was on and ready. I knew that I was going to be able to get some amazing pictures. A few Japanese men moved to give me access to the edge of this pool. 3 monkeys of differing ages were warming themselves in his steaming pool of water. You could see the fog from the heat resting on top of the water. The monkeys were hidden in the haze for short moments and then the wind would blow and leave stunning views of these amazing animals.

I was surprised that they were unfazed by the human eyes that were transfixed on them. 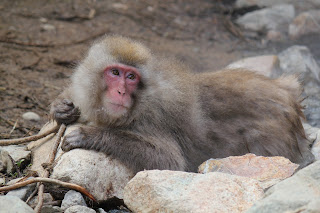 I took several pictures in this area and couldn't stop smiling with excitement as I took in their every movement.

I heard rumblings coming around the corner. My curiosity was peaked and I couldn't help but be nosy and venture towards this noise within the quiet. When I rounded the corner, I found a couple people huddled around a trickling steam. This little guy to the right was sprawled out trying to soak up the warmth from a thin stream of water. I got close enough to reach out and touch him. It was amazing! You could tell that he was trying to find a place away from the pack but this was not cutting it. 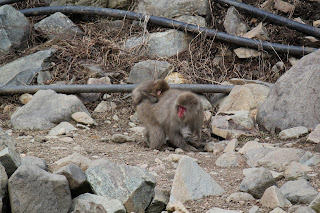 In the corner of my eye, I saw some rustling in the trees. Walking down the steep, rocky cliff was a mama with her baby. Baby clung to her back and would shimmy himself up after she took a few steps. Mama's head shot back and forth as she took in her surroundings. She was not as laid back as the monkeys we had currently seen. You could tell that her protective instincts where in full force. 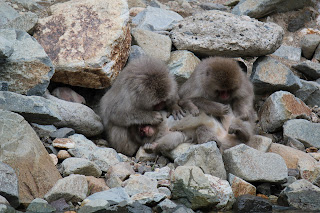 In a few minutes, she settled in with another female monkey and began grooming the baby. They gently poked and shifted the fur from one area to the next. Occasionally, they would stop and swiftly move their fingers to their mouths before their fingers began dancing in the fur again. I watched in amazement by how quickly their nimble fingers moved. It was almost like a dance.

We spent a good hour here before venturing back down the hill towards the bus. I prayed that I had gotten enough pictures to keep my memories vivid and captured forever. Well....if there was any doubt, we had several more chances to capture some more. 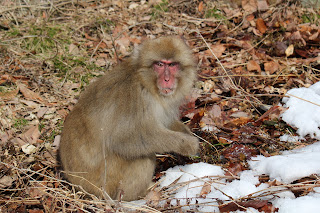 Around the bend stood this grouchy guy who was guarding the rim of the area. It was quickly apparent to me that this must be a male. He was highly aware of our activities and tried to stare us all down. We were warned ahead of time to not stare at the monkeys as this made them agitated and they were known to take it as a challenge. I quickly averted my eyes and told my children to do the same. You could tell that he was not one to test these rules with. 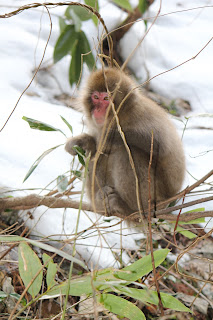 With our fingers numb and noses non-existent in feeling, we walked briskly in hopes of getting to the warmth of the cafe and hot chocolate. The monkeys seemed to be following us. On the path up the hill, we didn't see any until we got to the "head quarters" area. On the way down, they were all over the woods. They would walk all the way down to the path and almost seemed like they were going to help guide us.

It was an amazing experience and one that I will never forget.